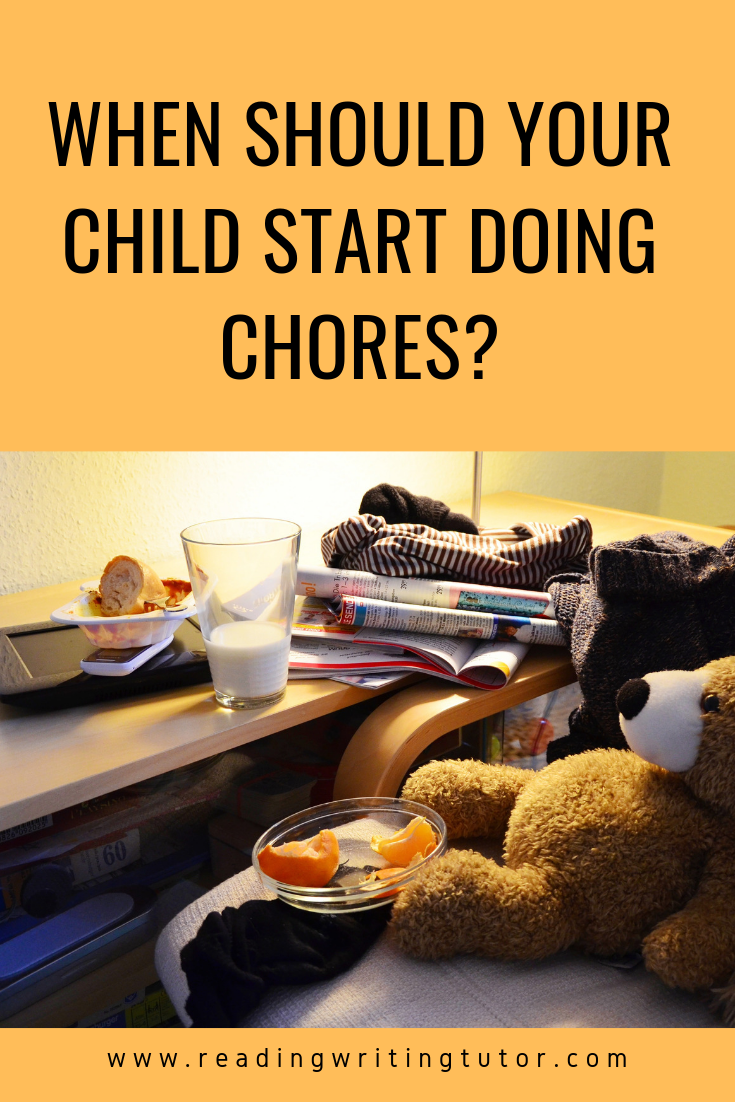 Pinterest is chock full of lists and infographics and opinions about the right age to give kids chores. Chatting with groups of parents, I’ve realized that chores are an issue that is divisive. There is a huge range of opinions about what are age-appropriate chores. So when should a child start doing chores? I think the answer is “as soon as possible.” I’ll tell you why.

I’ve written before about ways to help children develop executive functioning skills. These are skills that help children “execute” all kinds of tasks, from getting ready for school on time to applying to college. These skills develop over time, even into adulthood, but kids who don’t develop them at the same time as their peers can be at a big disadvantage when it comes to school.

Chores are one way to help children develop their executive functioning skills, as well as improving their confidence, problem-solving and motor skills. Chores can be a way to spend valuable time with your kids. And finally, having your kids do chores means the family gets more done faster! (Eventually).

If your goal is to have your child building all these skills as early as they can, you will start to see chores everywhere you look. Here is how my kids started out and some ideas I have for turning over more responsibility as they grow.

One to two years

Yes, at 16 months, my daughter is starting to help out. She loves it because she’s interacting with us and we cheer and thank her. Some of her skills are:

A little closer to two, my son would unwrap the bars of soap when we bought a bulk pack of them. It took practice to put soap in one basket and wrappers in the trash, but that’s what makes it good for building executive functions.

Probably by the time he turned two, he was carrying his empty plate to the kitchen, although I took anything messy for him.

By two, he was also wiping his table with a water spray bottle and a little cloth. He loved this job the most because of the spraying of water. It took a long time to refine it so it didn’t make a bigger mess than it cleaned up, but I think it’s worth it because using the sprayer builds hand strength and now I just have to say, “Clean the table first,” and at 4 he gets the mild cleaner, sprays down the surface, wipes the table and puts the cloth in the laundry and the spray in the cabinet. The time we invested between two and four has really paid off.

By the age of 3, my son had a lot of responsibilities. They were often more trouble than they were worth because things take him longer and he would often get distracted. Sometimes, there just wasn’t time for him to do things for himself, especially on weeknights. But I tried to make up for it on weekends and in the summer. Here are some jobs he had before he was 3:

In the last year, my son has increased independence with the chores he has been doing for a long time, and we’ve started doing visual checklists so he does not need as many reminders to do the things he is responsible for every day. We’ve also added some new jobs:

Please don’t think I’m raising perfect robot children who do all these things happily. There are tears sometimes and there is foot-dragging and there are endless reminders on some days. I frame all these jobs as things that have to get done so we can go more places and have more fun together. Sometimes I do play up the drama a little. “I know, I would love to go to the park this afternoon, but unfortunately, I have soooooo much laundry to fold I won’t be able to take you…unless I get some help….”

I also give lots of choices. “I’m going to need some help getting ready for dinner. Would you rather go pick peas in the garden or wipe the dining room table?” And if he spends 20 minutes running around the front yard, great, as long as he comes back with the beans! I’m looking forward to adding some chores in the next few years, as the kids get older. Here’s my wishlist:

In the end, I want my children to learn a few things. One, this house doesn’t run itself. My husband and I work hard to feed everyone, clothe them, and keep the house clean. Each member of the family is part of that system and we do these things for each other because that’s what it means to be in a family.

Two, I want them to learn how to solve problems and work through jobs more and more independently. Today, my four-and-a-half year old made his peanut butter and fluff sandwich and set it down on the table before realizing he hadn’t cut it. He complained loudly because he had used the last two knives in the drawer to spread the peanut butter and the fluff (“Because I didn’t want them to get mixed together.” Problem-solving!) and didn’t have one to cut the sandwich because he put them both in the sink. I was sympathetic but I didn’t get up from my own lunch or offer a solution. He considered a couple of options: a fork, a spoon. I did have to prompt him to think about where else there could be knives (in the clean dishwasher) but he went through a lot of steps before I had to help him.

I joke that I want my kids to grow up to be employable and marriageable but really, what would be so bad about that? Employable = problem-solving, skilled, nice to be around. Marriageable = nice to be around and a responsible roommate. Sure, that’s too simplistic but I think it’s a great start. And I’m starting with chores.

Download a free Morning Chores Checklist and join my email list for more ideas and updates on my upcoming book 4 Things to Teach Your Child Before Kindergarten.

Get your morning chores checklist

Signup for to download your morning checklist and get email updates.